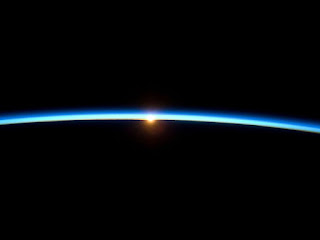 Viewed from space, a tiny layer of atmosphere is all that separates our world from the cold universe beyond. A thin line of blue vapor is the fragile thread upon which all life depends. Every life form in a thousand geological worlds, our whole globe teaming with flora and fauna, with creatures of every kind, is dependent on the ethereal curtain above us... could it really be that mere chance is the only thing keeping us all alive in such a delicate balance?

Through many years of examining the evidence, I have become more and more certain that there are solid reasons to believe that life on earth is hanging on by more than a fragile thread of happenstance, that there is evidence enough to know we’re here by more than a trick of fate or turn of the dice.

The fact that for evolution to have brought into existence a single cell is mathematically impossible (not to mention for it to have spontaneously brought about all the vastly diverse and perfectly organized, interdependent life forms on earth) is an insurmountable barrier to its feasibility. It’s especially problematic when you consider that even the simplest cell is a complex structure of highly organized instruments functioning at a level of efficiency untouched by anything mankind has yet been able to manufacture.

It can hardly be said that there’s anything simple about a single cell. If size is a reflection of advancement in technology and design, the cell wins hands down. With each cell being a vastly complex system with enough different functional departments to rival any production factory, 10,000 of them can fit on the head of a pin. Yet each of these tiny units of life contains trillions of bits of perfectly organized information in its twisted strands of DNA.

The laws of physics governing our present universe further complicate the idea of any organism spontaneously developing into a more highly complex organism through chance mutations. Entropy, the 2nd law of thermodynamics, ensures that all things degrade and decay over time rather than evolving into a higher order.

Three elements of nature especially show evidence for a young earth- waterfalls, stratified rock and ocean sediments. In looking at the world’s major waterfalls, we can look at the path which they have carved away from where they started to where they are now, and according to their current rate of erosion they virtually all date back only a few thousand years.

Stratified rocks reveal that there is a strange absence of top soil between the geological layers of the earth, and for the most part only exists on the uppermost layer. Besides that, the layers are nearly all flat, showing none of the typical soil erosion that would certainly be present if each layer had been exposed to the elements for the long periods of time scientists are claiming. It’s much more obvious to conclude that they formed rapidly through catastrophic events such as a combination of volcanic activity and swirling waters that occurred during a world-wide flood. With the eruption of Mt. St. Helens in the US we were given a first hand glimpse of this process- which resulted in the rapid formation of sedimentary layers much like those seen in geological strata all over the earth.

The depth of ocean sediments also indicates that we live on a young earth. If life on earth has existed for millions of years, the ocean sediments should be much deeper than they currently are- mud should literally choke the ocean bottoms. Plate tectonics do not occur fast enough to bury the billions of tons of rock and dirt that enter the ocean every year through wind and water erosion off of the continents.

Another question is, if living creatures came into being through a continual process of transformation from one species to the next- then why does there appear to be such definite lines drawn defining different animal species from one another? Shouldn’t it rather be that instead of an almost total absence of things which anyone could even try to claim are living examples of transitional species, it should rather be a common place, daily experience to see transitional animals in between every living species right in front of us? If species have really transitioned from one type of animal to another continuously throughout history, we shouldn’t be able to classify them into such distinctly different categories which have no cross over. Why is it that we still have the original forms alive with us today (such as reptiles, which supposedly evolved into birds, and monkeys, which supposedly evolved into man), but the transitional stages of these animals aren’t alive any more?

A lot of this goes back to common sense. It appears that the Creator of our world seems to have arranged things so that most anyone who will think and reason for themselves instead of trusting their destiny to “the experts” may draw the conclusion of His existence from nature.

Darwin himself admitted the potential impossibility of his theory. He said: "If it could be demonstrated that any complex organ existed, which could not possibly have been formed by numerous, successive, slight modifications, my theory would absolutely break down." In other words, if it could be demonstrated that some life forms are irreducibly complex, the theory of evolution would not stand. It is in fact true that many forms and systems of life are irreducibly complex. But perhaps none so basic to all life as ATP itself...

ATP, one of the most basic elements essential to life, is irreducibly complex. There must be complex enzymes concurrently present in order to produce ATP, but ATP must be present for the enzymes to be produced. Each enzyme is extremely complex, and if there were even one piece of it incorrect it would be denatured.

This is the signature of our creator God. Although we do not see Him actually, we see the evidence of His existence- just like footprints in the sand give you solid reason to believe that a person walked by there sometime in the recent past.
It is of note that there are similar spiraling patterns in all things from the smallest atom to the largest galaxies. The theory of random processes also cannot explain things like this, or how the universe is organized into laminate layers. The following series of pictures with explanation addresses some of these issues from a rational viewpoint; http://www.fractaluniverse.org/v2/?page_id=7
These reoccurring spiral patterns very often fit the simple math equation of a Fibonacci spiral, which is a designer sequence that occurs not only on the tiny atomic and huge cosmic scale, but all throughout nature.
A few other things to take note of. Consider beauty and structure. Where did it come from if we all just came from some primordial puddle of sludge evolving into whatever could survive the harsh elements to perpetuate itself? Why are roses so beautiful? What evolutionary purpose could possibly explain the breathtaking beauty and scent of the rose? All it would need for mere survival is some sort of rotten stench to attract insects, and perhaps a blob of color. So how, then, do you explain the multiple layers of exquisitely folded petals of living velvet and the unmatched beauty and scent that thrill human emotions and seem to speak of symbolic meaning which stimulates to imagination and poetry? The humble rose is an exquisite example of something which can’t be explained well by the theory of mere survival.

Other life principles also fit poorly into the evolutionary model. How do you explain love, kindness, altruism and an innate sense of right and wrong by evolutionary theory? If our only purpose in life is merely to survive, then why is it that people all over the world desire to have a higher purpose and have deep cravings for spirituality?

Its not actually so rational or logical to believe in evolution. Unbiased and clear, thoughtful study logically leads to the conclusion that God created the universe. But, unfortunately, many people aren’t interested in religion and therefore have a bias against the possibility of God’s existence.

Unfortunately, modern science is not as unbiased or objective as its proponents would like to make you think it is. The fact that even many top evolutionists over the years have given up on trying to make the theory work and some have gone to believing ideas such as the "hopeful monsters" (like when a lizard lays an egg and a bird hatches out of it) shows a willingness to believe almost anything, no matter how irrational, rather than to accept the theory of creation and the Bible.

Misinterpretation and misrepresentation of the Bible by well-meaning Christians is another huge reason for the acceptance of evolution. False doctrines- such as eternally burning hell fire- that are based on a very few verses rather than from studying everything the Bible has to say on a subject- so assault people's innate sense of justice and fairness and make God look like such a monster that many good, honest-hearted people cannot allow themselves to believe such a being could exist in the universe. Teachings of eternal hell-fire and many other false doctrines were rampant around the time when evolutionary theory began to be promoted- and it seemed like a welcome relief to many to have a break from the oppressive religion that had been forced on them for so long. The devil, enemy of mankind, is an incredibly intelligent fallen angel- he knows just what kind of actions will cause equal and opposite reactions.

Here are some links about the scientific and medical validity of the Bible;

For very excellent topical Bible study resources, including end-time events and prophecy, see the following resources (Amazing Facts- btw, I am in no way connected with them in business): http://www.amazingfacts.org/Bible-study/Bible-study-guides.aspxSee also;