Revelation 6:12 I looked when He opened the sixth seal, and behold, there was a great earthquake; and the sun became black as sackcloth of hair, and the moon became like blood. The book of Revelation mentions several earthquakes as part of the end time events. With scientific predictions for geology in places like California, it's not hard to imagine how a very catastrophic earthquake could happen. Especially when people are building right on top of the danger zone. I will describe one such example for you here... In Highland, California, a beautiful community of the San Bernardino foothills, there lies a sleeping giant...

Unbeknownst to many residents, the San Andreas Fault runs right through their community. 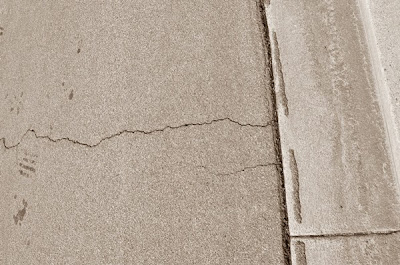 When many people think of the San Andreas Fault they expect to see something like this...

By USGS (http://pubs.usgs.gov/gip/earthq1/how.html) [Public domain], via Wikimedia Commons (color edited) But in places where the fault has been dormant for many years there are no obvious surface indicators at all. 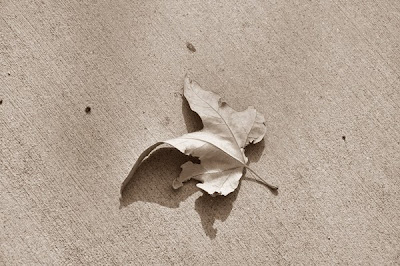 That is the case in Highland, CA where the San Andreas Fault actually crosses under Highland Avenue five times in just a few short miles before it heads south through barren land to the Salton Sea. 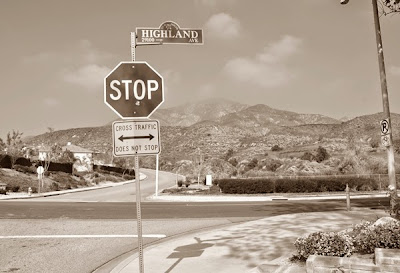 I know because I live here (for now)... Yes, strangely, I hadn’t thought about looking up where specific fault lines lie until recently when I was doing some research about earthquake potential. Then, when I looked at the following website which tracks the exact path of the San Andreas Fault I noticed that it goes straight through the community I live in; http://www.thulescientific.com/san-andreas-fault-map.html The map helped answer some questions I’ve had about the funny design of our neighborhood. Like how this strange no-man’s land appears to cut right off of Highland Street at a diagonal angle; 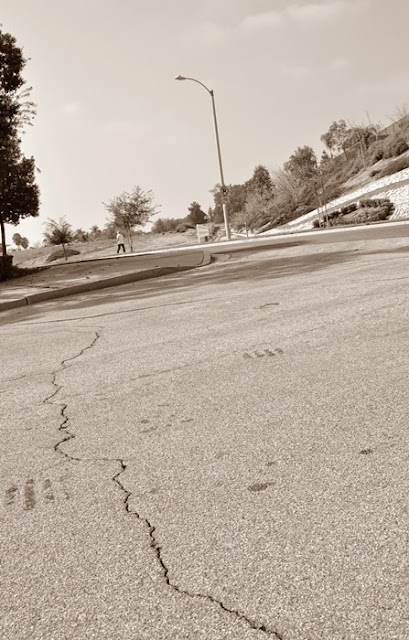 This is looking at it from the street below. You can see the man walking past the diagonal no-man’s land, in which the San Andreas Fault lies. From the angle it comes (from looking at the map) the fault should continue straight toward the camera where I was standing on the street below it to take the picture. Here’s a closer look at the area the man was walking past in the picture above; 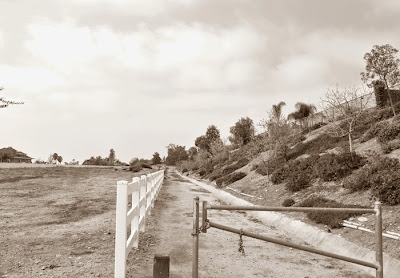 The area is made into a walking path with a white fence similar to the walking paths that run all through the community. But the difference is, as I said, that it’s accompanied by an empty lot that together with the walking path strangely cuts at a diagonal angle right through a prime real estate community. But when you understand what lies below it, things start to make sense. Looking at a close-up of the Google satellite map with the path of the San Andreas Fault answered the question for me. Unfortunately, there is no sign posted – it seems that you have to do your own research in order to find this out. Here’s another picture of the same walking path and empty lot after I walked into it a little ways (they have put boulders above the walking path, they aren’t naturally occurring, and the fence is no longer visible because the walking path is lower than the open ground beside it)... 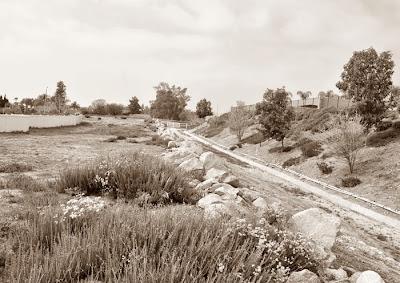 And here’s looking back from the opposite end after walking down the lot;

From close to where I was standing to take the above picture, if you turn around to see where the fault continues north-west, this is what you will see;

Yep...another strangely empty lot in the midst of a prime real estate area (you can see the house to the right, in most other areas of Highland those kind of houses are packed tightly together in subdivisions with few open fields of any kind). Those two posts with that little sign? They are directly in line with the diagonal path of the fault line from the picture above. But what does the sign say? Is it labeled “San Andreas Fault?” 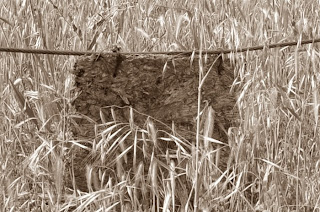 No... it’s just an old piece of rotting wood. Who knows if it ever had something written on it. I suppose it would be too expensive for community developers to raise people’s alarms by actually labeling the San Andreas Fault – because then real estate prices would go down quickly! That’s just a guess really – I only rent a room here so at this point I don’t know if home buyers are given any kind of warning or disclosure about that at all... Here’s looking deeper into the same lot from the picture above;

It’s filled with gorgeous meadows and trees (all green right now with the last few months of occasional rain), but eerily empty. Here’s another picture of the left side of the same lot; 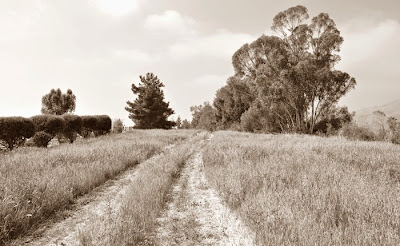 You do find some strangely abandoned structures in the lot. Just behind the trees in the above picture I found this rusting staircase attached to nothing; 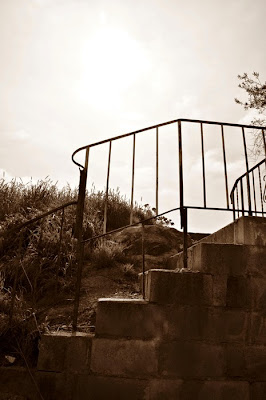 Same staircase from above; 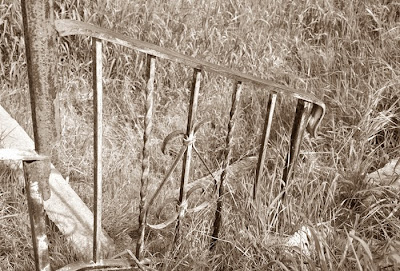 It seems to be from a house which may have been torn down when someone learned the truth about the zone they were in. The stair case goes down into this meadow (shown partially a couple of pictures up); 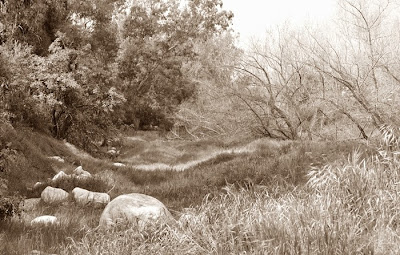 And here’s part of an old stone wall just down from the stair case, which also seems to be attached to nothing, surrounded by overgrown olive trees; 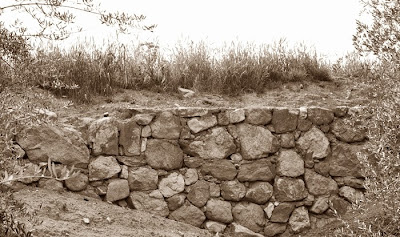 Pretty close to the wall I found this huge wild bee hive (showing this is definitely a place people don’t come to often)... 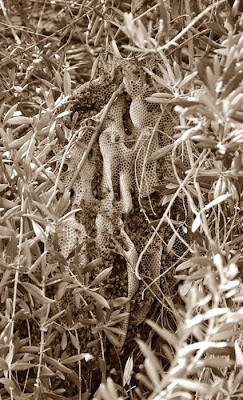 Red tailed hawks that frequent the area around highland were above as I walked... 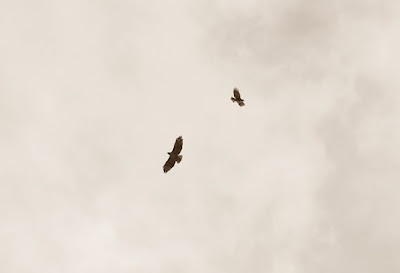 Walking back across fault line path to Highland street (where I showed the original picture above), I continued walking south to take some pictures of the other areas that the Google map showed the fault line going through. One prime area that it runs through is this little park;

From what the map showed, the San Andreas Fault goes directly through the green part of this park, right above the pond- probably pretty much right under these people who are picnicking and enjoying the lovely day. Here’s a picture from the street, showing the park to the bottom right and a line of houses to the left. The park runs all behind that row of houses and the green part (with the fault line in it) runs just above the lake and below these houses for several blocks...

At least I only rent a room here- it will be easy for me to relocate as soon as I get a chance. But, unfortunately, it’s not so easy for people who own houses here (if they even know about it or would want to move if they did). Perhaps the worst of all is the houses another mile or two down the street where the fault line crosses directly under the middle of about 20 or so houses! Don’t ask me how this could be- but if you look at the map on satellite mode you can see it for yourself; http://www.thulescientific.com/san-andreas-fault-map.html 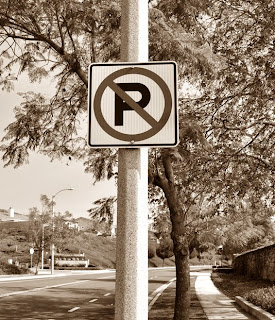 They’ve got no parking signs on Highland Street, but it seems like somebody forgot to post the “No Building” signs... 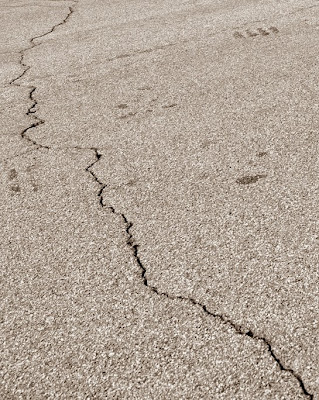 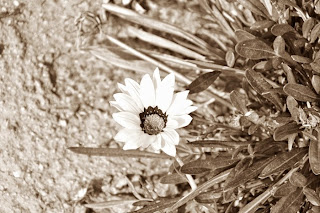 For very excellent topical Bible study resources, including end-time events and prophecy, see the following resources (Amazing Facts- btw, I am in no way connected with them in business) :http://www.amazingfacts.org/Bible-study/Bible-study-guides.aspx See also;